In the Name of Allah, the Abundantly Merciful, the Intensely Merciful.
All Praises are Due to Allah, the Lord of the Worlds.

Imam Ahmad Al Hassan (pbuh) was born on a Thursday on the 21st of March 1968 in the district of “Al Midaynah”, one of the districts of the governorate of Basra in Iraq.

He finished his academic studies and received his bachelor’s degree in civil engineering from the university of Basra in the early 90’s.

He is married and has a number of sons and daughters. He moved to the city of Najaf to study religious studies after he finished his academic studies. 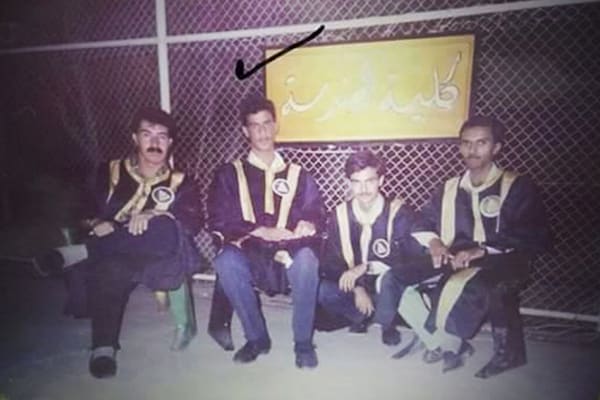 He is the first Mahdi, the first of the 12 Mahdis (pbuh)- the vicegerents and successors of Imam Mahdi Muhammad ibn Al Hassan Al Askari (pbuhahf), are mentioned in the will of Prophet Muhammad (pbuhahf) which he left on the night of his death.

He is the messenger and successor of Imam Mahdi Muhammad ibn Al Hassan Al Askari (pbuhahf) to all of humanity. He is the promised Yamani, the companion of the Black Banners of the East.

From Abi Baseer, he said that Imam Al Baqir (pbuh) said: “None of the banners are more guided than the banner of the Yamani, it is the Banner of Guidance because he calls to your Companion. So if the Yamani emerges, selling weapons to people or to any Muslim becomes prohibited. And if the Yamani emerges, rise to him, because his banner is the banner of guidance. It is prohibited for any Muslim to turn away from him. And whoever turns away from him, then he is from the people of hell, because he calls to the truth and to a straight path.”

A few years before the year 1999, specifically in the year 1995, in the mausoleum of the two Imams, Al Hadi and Al Askari (pbut) the first meeting between Imam Mahdi (pbuhahf) and between Imam Ahmad Al Hassan (pbuh) in this physical world took place. After that meeting, further meetings between them (pbut) followed.

THE BEGINNING OF THE BLESSED DIVINE CALL

In the last days of the year 1999, per command of Imam Mahdi Muhammad Ibn Al Hassan Al Askari (pbuh), Imam Ahmad Al Hassan (pbuh) commenced the divine call, criticizing the falsehood of the Hawza in Najaf. He demanded a scientific, practical and monetary reform.

Days and months passed, rather almost 3 years passed with no support or helper to the Imam from the students of the Hawza. There were some who accepted his words and agreed with what he had to say about the financial corruption prevalent in the Hawza.

From here, a movement of reform of this financial corruption started, but it did not result in a true reformation. There were some changes to the monetary policies of some Shia scholars but it was barely worthy of mentioning.

Lavish and extravagant lifestyles continued with many of those scholars and those who are connected to them, and in return the society was full of people suffering from sickness and poverty of the body and soul.

None of them were working to change these miserable conditions. A few months later, he (pbuh) started declaring publicly his association to Imam Mahdi (pbuhahf) and him being a messenger from him (pbuhahf). This process was not through an announcement of Imam Ahmad Al Hassan (pbuh) alone.

Rather, a number of students from the scientific Hawza heard and saw in the kingdom of the heavens that which verified this to them. Some of them were in direct contact with Imam Ahmad Al Hassan (pbuh), others had never met him before.

All those students insisted on pledging allegiance to Imam Ahmad Al Hassan (pbuh) although he had warned them of the difficulty of this matter and that they may abandon him in the end, just like the people of Kufa abandoned Muslim Ibn Aqil (pbuh). But they pledged allegiance to him, pledging to ransom him with their selves and their money, as they themselves admitted and he did not ask for any of that from them.

After that, many of the Hawza students pledged allegiance to the Imam. But then, fear overcame them when the security forces of the cursed tyrant Saddam began coming after him. The students dispersed and went back on their pledges, and each group or individual looked for a reason to go back on their pledge and looked for an allegation to accuse him of.

But in the end they agreed upon two things:

The first: Accusing him of being a great magician.

The second: Accusing him of controlling the jinn and using them and summoning them to control them.

Imam Ahmad Al Hassan (pbuh) returned to his home again after the people left him, and only a few of the Howza students and believers remained with him.

In the month of July of the year 2003, a group of those believers came to him and renewed their pledge and brought him out of his house, and the call started anew.

Imam Mahdi (pbuhahf) then commanded him to announce the revolution against the oppressors, and to accelerate action and to work fast.

He called people to give victory to the truth and its people, and to work to establish truth and to raise the words of “There is no God but Allah,” for verily Allah’s word is the Highest and the word of the disbelievers is the lowest.

Sermon of the Meeting

HIS ABSENCE AND HOW HE WAS BETRAYED

Some time later the cronies of the tyrannical government in Iraq  at that time oppressed Imam Ahmad Al Hassan (pbuh) in alliance with some of the hypocrites who claimed to be of the Ansar of Imam Ahmad Al Hassan (pbuh). This was per command of the scholars of misguidance (The Marjas) in Najaf, Iraq together with some foreign entities because he was speaking the truth about their corruption.

They agreed on the inhumane decision to murder Imam Ahmed Al Hassan, forcing the Imam (pbuh) to leave the land of Iraq.

This is what he pbuh verified with his blessed voice when he said:

“…Do not be happy, O you oppressors!

Do not be happy by me leaving you and making Hijra from your lands, for it won’t be long before I return, with my father Muhammed ibn Al Hassan the Mahdi, peace be upon him…”

-From ‘The Sermon of the Meeting’

After Imam Ahmad Al-Hassan (pbuh) left the land of Iraq, the hypocrites who claimed to be of his ansar took control of the call directing it according to their own desires and the directions of their leaders in the tyrannical government of Iraq.

And some foreign entities as well took it upon themselves to alter the course of the call and make it deviate from its divine path that Imam Ahmad Al-Hassan (pbuh) had laid for it, namely the supremacy of God, and that true monotheism is spread to all corners of the earth, and that equality and justice spreads everywhere, and to stand against oppression and oppressors, tyrants and people who spread corruption, and to fill the earth with justice and fairness after it has been filled by those tyrants with oppression and injustice.

This is what the Imam (pbuh) made clear in the two books (the book of monotheism) and the (the book of the calf) as well as in his four sermons that were truly recorded with his voice, namely: The Story of the Meeting with Imam Al-Mahdi Muhammad ibn Al-Hassan Al Askari, The Sermon to The Students of The Scientific Hawza, The Sermon of ‘To Their Leader, Lest They Return’, and The Sermon of Hajj.

THE END OF HIS ABSENCE AND HIS APPEARANCE PBUH:

Imam Ahmad Al Hassan (pbuh) returned with Imam Mahdi (pbuhahf) as we have heard in the recorded promise with his blessed voice. After an absence that lasted almost 6 years, he met 40 men.

They were the best people on earth at that time. This was at the end of July of the year 2013, and this is what Imam Al Baqir (pbuh) had foretold in this narration:

Imam Al Baqir (pbuh): “The companion of this matter will go into occultation in some of these passes” and he pointed with his hand to the direction of Thee-Towa. Then he said: “Until before his emergence, the Mawla [Imam Ahmed], who was with him will come forth until he meets some of his companions and asks: ‘How many of you are there?’

They will reply: ‘We are forty people.’

Then he will ask: ‘How will you be if you see your Companion [Imam Mahdi]?’

They will reply: ‘By Allah, if he crumbles the mountains by us we will surely crumble them with him.’

Then he [Imam Ahmed] will come to them and say: ‘Point to ten of your leaders or the best of you.’

Then they point to them for him, so he takes them and brings them to their Companion (Imam Mahdi). And he promises them the next night.”

Imam Ahmad Al Hassan (pbuh) continued meeting them for more than a year and a half, until the blessed awaited day of the appearance of Imam Mahdi (pbuhahf) came, and his absence ended on Friday the 23rd of January 2015, and this is the day king Abdullah of Hijaz, may Allah curse him, perished.

The Prophet of Allah pbuhahf said:

Hijaz will be ruled by a man who has the name of an animal (i.e King Fahd (leopard).

and if you came close to him, you will not see anything wrong with his eyes.

A brother called Abdullah will succeed him.

Woe unto the Shia from him, he repeated it three times,

“The Qa’im shall not rise, until twelve men come forth and say that all of them have seen The Qa’im, but people will belie them.

Those 12 chieftains are the best of the 42 men, they were honored with meeting Imam Mahdi Muhammad ibn Al Hassan Al Askari (pbuhahf), lead by Imam Ahmad Al Hassan (pbuh), in a place fortified by God.